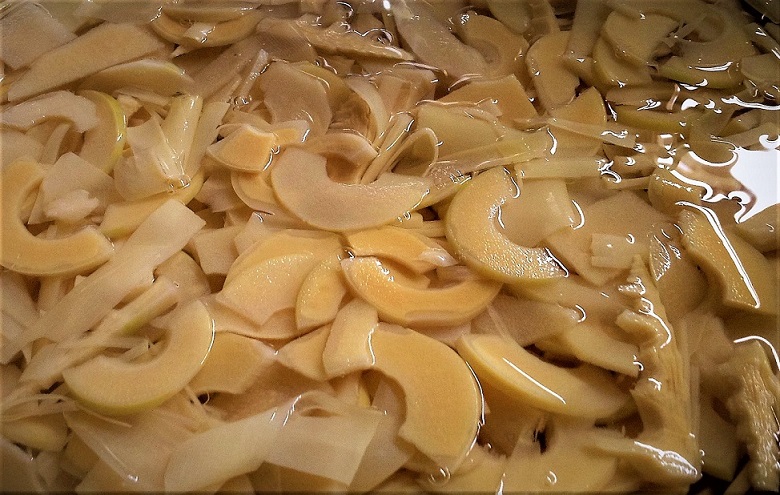 Fresh bamboo shoots are used as foods. People consume fresh bamboo shoots in various forms. Dried bamboo shoots. Canned bamboo shoots, Fermented food items, Bamboo shoot based powder, Medicines and all. Bamboo shoot forms a traditional delicacy in many countries. Being low in fat content and high in potassium, carbohydrate, dietary fibres, Vitamins and active materials, bamboo shoots are consumed in raw, canned, boiled, marinated, fermented, frozen, liquid and medicinal forms. The young shoots, after fortification, can be consumed by processing into a wide range of food products with longer shelf-life and better organoleptic qualities. However, the consumption pattern of bamboo shoots in most of the countries is traditional, non-standardized, seasonal and region-specific with little value addition. Made of edible bamboo shoots dried in the sun, used in cooking both veg and non-veg curries, can be used in place of tomato, best taste when put before 2-5 minutes. Sourced from the thick jungle forest of Assam, Meghalaya and Arunachal Pradesh (India). There many ways to cook the dried bamboo shoots, but stewing with chicken, or pork, or beef by adding soy sauce and garlic is one of the most popular dish. Simple and healthy